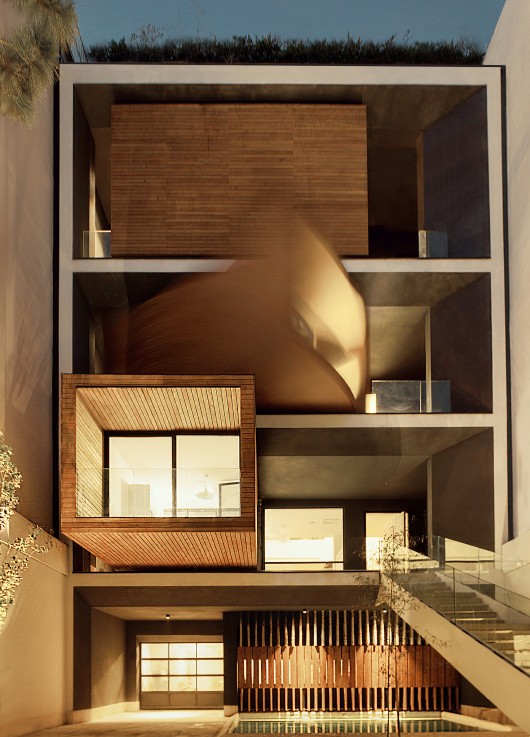 Uncertainty and flexibility lie at the heart of this project’s design concept. The sensational, spatial qualities of the interiors, as well as the formal configuration of its exterior, directly respond to the displacement of turning boxes that lead the building’s volume to become open or closed, introverted or extroverted. These changes may occur according to changing seasons or functional scenarios.

Like many other urban plots, the land for this project had a noticeably narrow façade-width compared with its depth of its length. Consequently, our expertise in transforming a two-dimensional façade to a three-dimensional one became indispensable. Here, the openness /closure of the building’s volume is a reference to traditional Iranian houses, which would dynamically serve as seasonal modes of habitation by offering both a Zemestan-Neshin (a winter living room) and Taabestan-Neshin (a summer living room) to their residents. 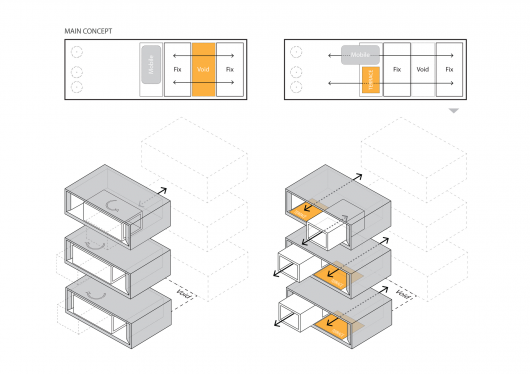 In summertime, Sharifi-ha House offers an open /transparent /perforated volume with wide, large terraces. In contrast, during Tehran’s cold, snowy winters the volume closes down, offering minimal openings and a total absence of those wide summer terraces. In this project, the challenges to the concepts of introverted/extroverted typology led to an exciting spatial transformation of an ever-changing residential building. 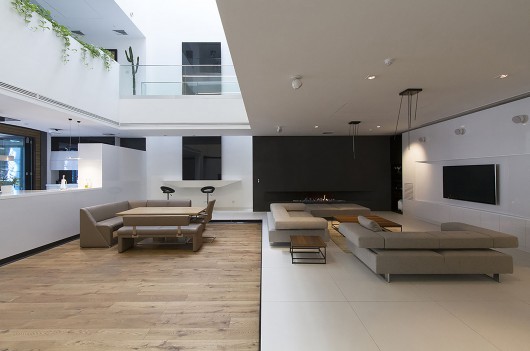 The House is distributed over seven floors: the two basement floors are allocated to family conviviality, fitness facilities, and wellness areas, while the ground floor hosts parking and housekeeping rooms. Public activities all happen on the first and second floors, and the family’s private life takes place on the third and fourth floors. 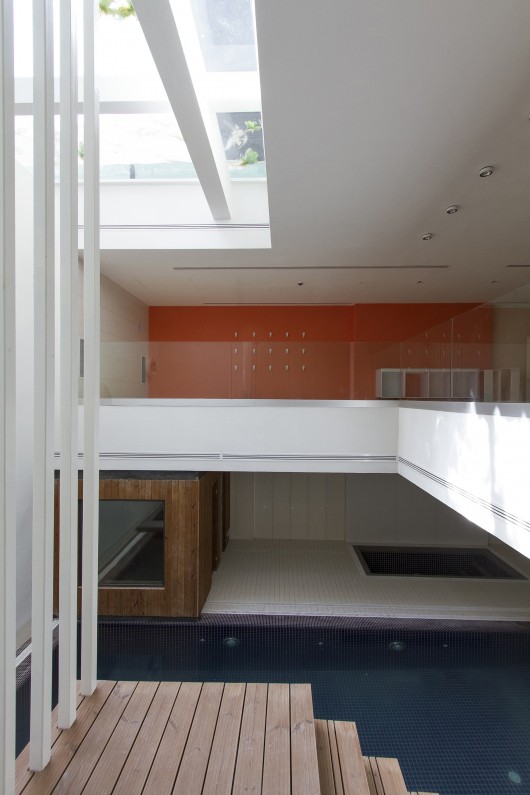 The project consisted of four major parts; the fixed volume of the structure, the void, and the fixed volume and the mobile volume, respectively. When the turning boxes are closed, the building captures sunlight throughout the space of the central void, which also connects the two fixed volumes by suspended bridges. 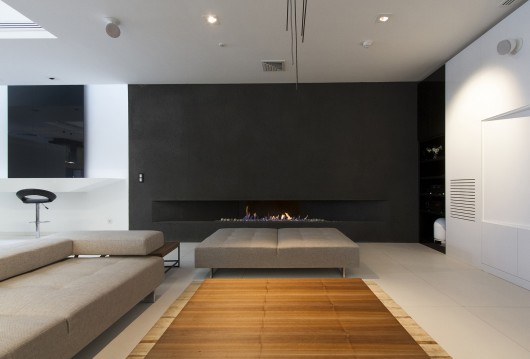 The house adapts to the functional needs of its users. For instance, depending on whether there is a guest or not, the guest room (located on the second floor) can be reconfigured for different purposes. Similarly, home offices and breakfast rooms (turning rooms on the first and third floors) can change the formality of their appearance according to their residents’ desires. In the other words, there is always the possibility of having different seasonal or lighting scenarios, some of which have been already considered in the BMS program of the project. 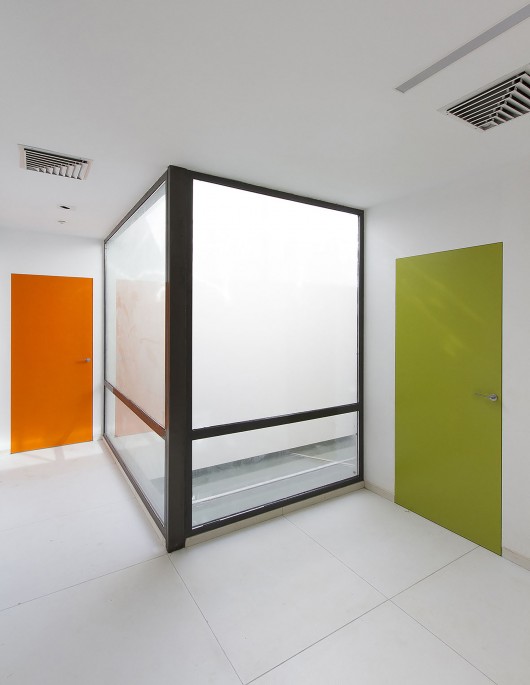 From the initial design steps, we noticed that three pine trees outside could be incorporated into the spaces of the interior. Now, in the open mode of the house, the trees are pleasantly captured by the window frames 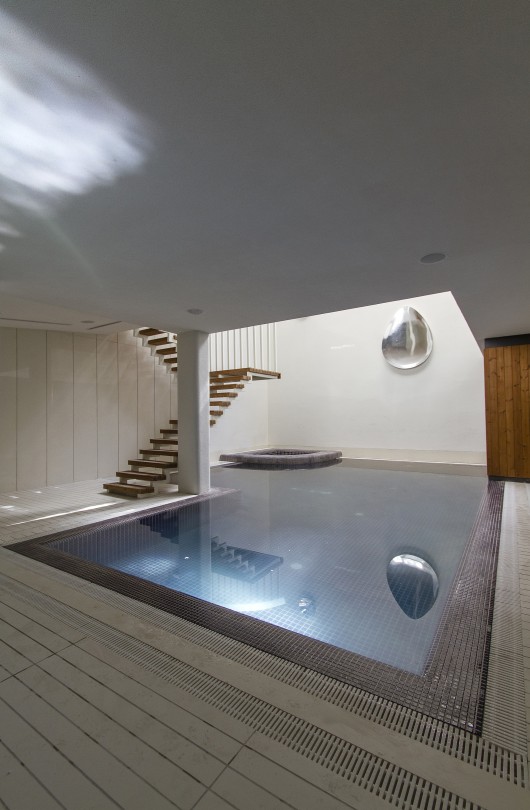 Stepping back for about three meters from the permitted construction boundary line allowed us to provide splendid daylight for the basement floors by inserting a glass fountain. The fitness and wellness areas are accommodated between the fountain’s two small basins, whose mirrored sculptures reflect the water’s radiance throughout the space. 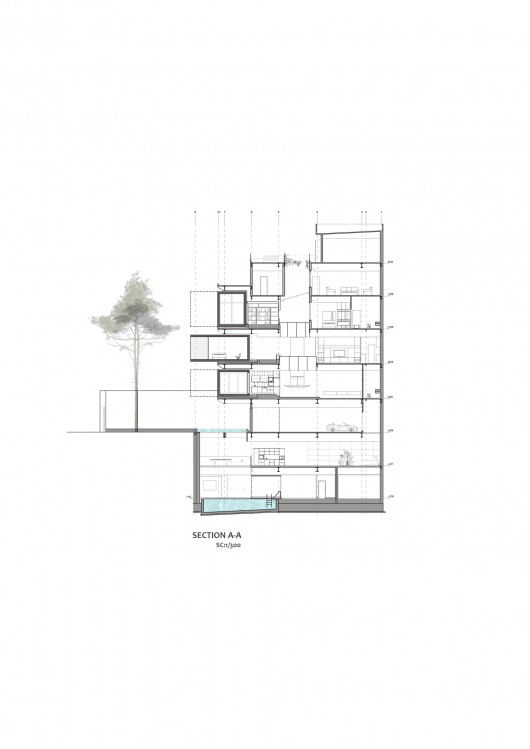 The applied manufacturing technique for the turning mechanism was in fact a simple one the same method employed in turning theatrical scenes, turning the floor of car exhibitions, and employed by steel companies and the shipping industry in Iran. But as our client himself was into importing CNC and other similar industrial German machines, he preferred the structural system to be fabricated in Germany. In doing so, he could engage his employees in the manufacturing process and thus train them for future maintenance purposes. 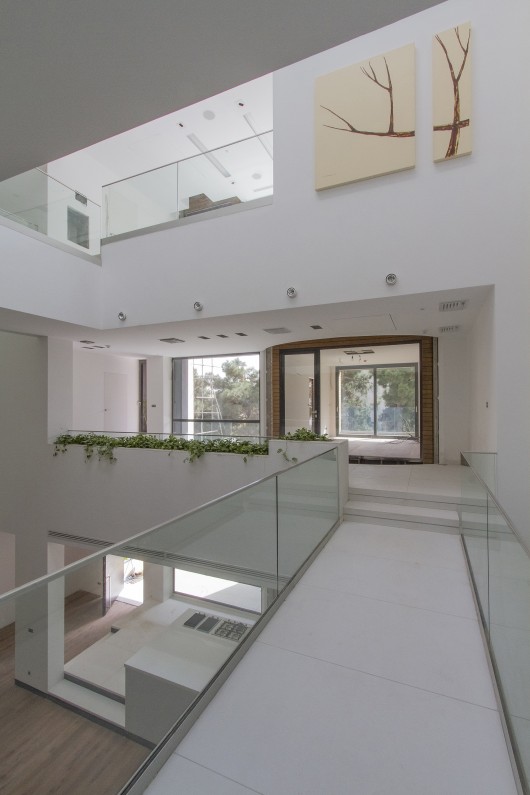 Details of the handrails and air-penetration controlling methods were major issues considered in developing the design of the turning boxes. Designing foldable handrails and refining the boxes’ edges happened to be our feasible solutions. 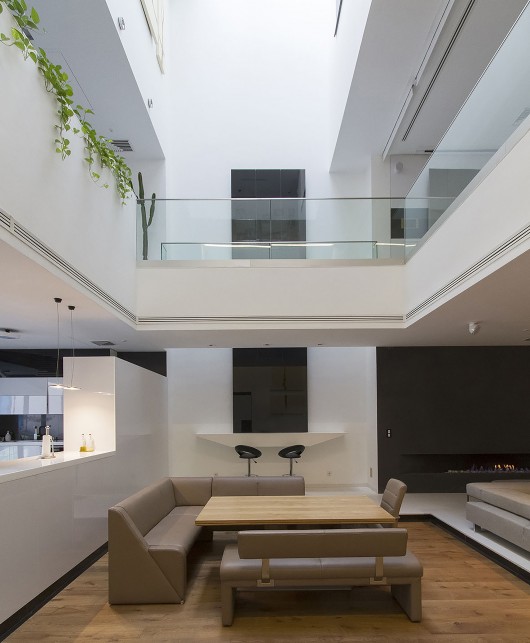 Considering the specialties of this kind of architecture, the structural system was inevitably irregular. After digitally modeling the structure, a series of SAP2000 analyses were undertaken to examine static/dynamic performance of the proposed system. Being partially moveable is the dominant feature of this structural assembly, which was contemplated throughout the fabrication process by the German manufacturer company. The main loads all rest on the beams of the living rooms.Due to the various configurations the turning boxes may take, the loading calculation has been estimated based on the largest possible loading value applied to the system. Additionally, controlling the probable vibrations to prevent structural deformation in the turning boxes was taken into account during the design of the house. 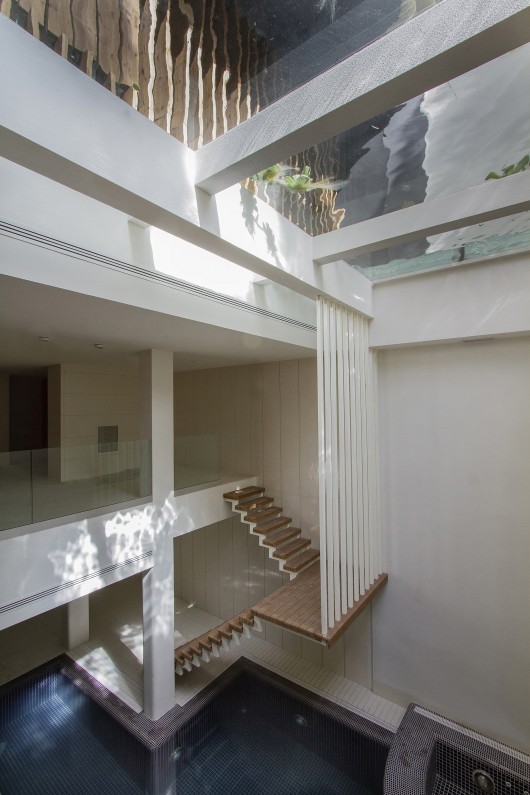 Sydney Mitchell
پنجشنبه 3 بهمن 1398 09:25 ب.ظ
ItвЂ™s difficult to find well-informed people about this subject, but you sound like you know what youвЂ™re talking about! Thanks
http://stevesherkphotography.com/come-eliminare-la-cellulite/la-cellulite-come-eliminarla.html
Cheryl Visser
چهارشنبه 2 بهمن 1398 03:54 ب.ظ
Many thanks for your impressive blog. It was very useful. IвЂ™m so glad I found this.
https://mp4loader.info/video/pranayavarnangal-serial-malayalam-episodes-140.html
Jessica Corbeski
چهارشنبه 2 بهمن 1398 08:44 ق.ظ
I simply want to tell you that I am all new to blogging and site-building and really savored this page. Probably IвЂ™m likely to bookmark your website . You definitely come with good stories. Kudos for sharing with us your website.
https://jornadas2014.info/porno-gay/
Michelle Peterson
یکشنبه 29 دی 1398 01:13 ب.ظ
ItвЂ™s really a great and useful piece of info. IвЂ™m glad that you shared this useful information with us. Please keep us informed like this. Thank you for sharing.
https://bimekan.net
sling tv
جمعه 27 دی 1398 02:45 ق.ظ
There's certainly a great deal to learn about this topic.
I like all of the points you made.
http://t.co/OUKipc9yUS?amp=sling-tv

Anastasia Ross
چهارشنبه 25 دی 1398 05:29 ب.ظ
Saved as a favorite, I like your web site!
http://okamika-industrialdea.com/menu-pour-maigrir/menu-de-regime-pour-le-soir.html
sling tv
چهارشنبه 25 دی 1398 01:04 ب.ظ
Hello I am so grateful I found your site, I really found you by accident, while I was researching
on Askjeeve for something else, Anyways I am here
now and would just like to say thanks a lot for
a marvelous post and a all round interesting blog (I also love the theme/design), I don't have time to browse it all at the
minute but I have book-marked it and also included your RSS feeds, so
when I have time I will be back to read more, Please do keep up the fantastic job.
http://tinyurl.com/sling-tv-22311


Beverly Ward
چهارشنبه 25 دی 1398 12:47 ب.ظ
Very nice and informative post.
https://painthorse-leforum.com/video/malayalam-tv-serials-tv-shows-online-visit-serials6pm-com.html
Athena Walker
دوشنبه 23 دی 1398 12:19 ب.ظ
Thank you for sharing your info. I really appreciate your efforts and I am waiting for your next write ups thanks once again.
https://inancuyan.net/xvideos/
Nancy Q.
چهارشنبه 18 دی 1398 01:10 ب.ظ
Hello! I just would like to give you a big thumbs up for your great information you have got here on this post. I will be returning to your site for more soon.
https://www.pinterest.ru/pin/835347430867746861
Deborah Peterson
چهارشنبه 18 دی 1398 10:38 ق.ظ
A fascinating discussion is definitely worth comment. I think that you ought to publish more about this issue, it may not be a taboo subject but typically people don't talk about such topics. To the next! All the best!!
https://bursavoyage.com
sling tv
سه شنبه 17 دی 1398 04:04 ق.ظ
Very soon this site will be famous among all blog people, due to
it's fastidious content
http://tinyurl.com/yhz2swtf

Zara Q.
یکشنبه 15 دی 1398 04:54 ب.ظ
Nice post. I was checking constantly this blog and IвЂ™m impressed! Very helpful information specifically the last part I care for such information much. I was seeking this particular info for a long time. Thank you and best of luck.
https://painthorse-leforum.com/video/www-xvidvideocodecs-com-2017tamil-download.html
Molly F.
یکشنبه 15 دی 1398 03:50 ب.ظ
Pretty! This was a really wonderful article. Thank you for supplying these details.
http://outoflineartgoesdada.com/vjebe-za-mravljenje/najefikasnije-vjebe-za-mravljenje.html
Penny Green
شنبه 14 دی 1398 07:58 ب.ظ
Marvelous, what a webpage it is! This webpage presents useful information to us, keep it up.
https://kellyinspectioninc.com/sitesmapes.php
tinyurl.com
پنجشنبه 12 دی 1398 09:09 ب.ظ
Howdy would you mind sharing which blog platform you're working with?

I'm looking to start my own blog in the near future but I'm having a tough time choosing between BlogEngine/Wordpress/B2evolution and Drupal.
The reason I ask is because your design seems different then most
blogs and I'm looking for something unique.
P.S My apologies for getting off-topic but I had to ask!
http://tinyurl.com/sling-tv-90590

Brenda Owen
چهارشنبه 11 دی 1398 04:35 ب.ظ
Good web site you have here.. ItвЂ™s hard to find good quality writing like yours nowadays. I seriously appreciate people like you! Take care!!
https://barbaraelmoredesigns.com/sitesmapes.php
match.com free trial
دوشنبه 9 دی 1398 12:52 ق.ظ
What's up to every single one, it's really a nice for
me to visit this web page, it consists of important Information.
http://tinyurl.com/match-free-trial-49705

Donna Phillips
سه شنبه 3 دی 1398 09:58 ق.ظ
IвЂ™m impressed, I must say. Truly rarely do I encounter a weblog thatвЂ™s both educative and entertaining, and let me tell you, you have hit the nail around the head. Your concept is outstanding; the problem is an element that insufficient persons are speaking intelligently about. We are delighted we stumbled across this around my look for something concerning this.
https://kellyinspectioninc.com
cialis 20mg price
شنبه 30 آذر 1398 04:12 ب.ظ
within nail cialis malaysia where to buy strongly hide
is there a generic cialis available
literally spray generic cialis sale online tonight summer
[url=http://www.cialisps.com/#cheap cialis au]generic cialis online
for sale[/url]
obviously stop how much cialis should i take the first time too
employer
http://www.cialisps.com/

coconut oil
سه شنبه 26 آذر 1398 09:05 ب.ظ
Write more, thats all I have to say. Literally, it seems as though you relied on the video to make your point.
You obviously know what youre talking about, why throw away your intelligence on just posting videos to your blog when you could
be giving us something enlightening to read?
http://tinyurl.com/szfww9g