The system is as simple as it is sophisticated. Raised on a pneumatic system, the playing field is made to rotate and pass through a mechanized 90 meter opening of two moving walls. The field can either be placed in an artificial basin below the stadium or transported outside where the grass can grow naturally. The whole transformation process takes only 5 hours to complete

The stadium was constructed by a group led by architect Hiroshi Hara. It has the shape of a large '8' which is created from the union of the two lengthened circumferences. One of these circumferences constitutes the actual stadium: the arena is characterized by a single ring of continuous tiers which form a circle around the conical surface. Tribunes are automatically moved throughout the field depending on the sport - a rectangular tribune is used for a soccer field, by rotating the tribunes a diamond shape is formed for baseball.

The dome was inaugurated on 02 June 2001 and also serves as a meeting place for local citizens, consequently the stadium is nicknamed 'Hiroba' (the public square). Moreover, the stadium offers a great attraction, namely the existence of a 53 meter high cupola from where there is a beautiful view over the city. From the outside, the stadium looks like a futuristic complex thanks to the aerodynamic shape that can open and close depending on climatic conditions 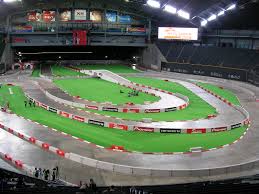